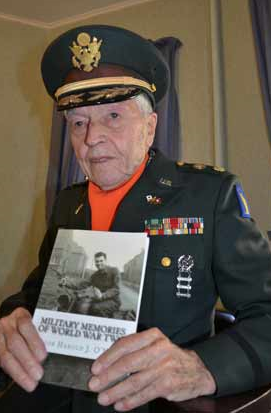 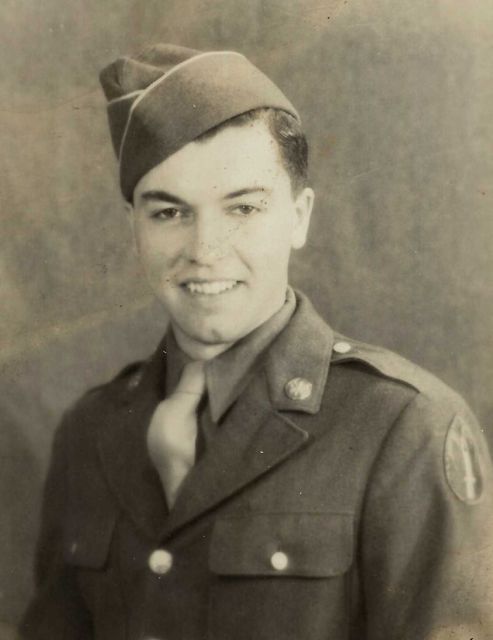 Harold O’Neill, 95, of Patchogue, in a photo taken at Camp Van Dorn in Mississippi in 1943

What he did in the war

The chapters jump out as if they happened yesterday. Like the time Harold O’Neill was sleeping on a pile of duffel bags in the back of an Army truck with machine gun bullets whizzing as the vehicle in back burst into flames and the one in front was hit. That was in Calvados. Or the incident on the outskirts of the Oberkassel on the Rhine across from Dusseldorf when the gun crew, the girls of the Hitler Madchen, popped their 88s to anti-aircraft elevation. Sometimes, in looking for a safe, warm place to sleep, he’d pick a wide-enough space with his buddies between two burning houses. The enemy had already done their damage there.

There were the mail censoring stories; one male censor was upset by a soldier who fibbed in letters with “you are my only love” to three different girls. (Dangerous but not life-threatening.) Or the one about the persistent jokester. He got his comeuppance when fellow soldiers dragged his bed outside while he was sleeping. It was cold, it started to snow and he wound up in the hospital, assigned to another barracks. Payback!

O’Neill’s “Military Memories of World War Two” isn’t chronological but actually a compilation from 75 articles, most of them for the 83rd Infantry Division Newsletter. His World War II combat experience, including Normandy and the Battle of the Bulge, was with the 83rd Signal Company until the end of the war in Europe. (O’Neill was with the 77th Signal Company of the Reserve 77th Inf. Div. from 1951 to 1965.) He is a retired U.S. Army major.

“My daughter and granddaughter were always after me to write a book,” he said of Sheila Malia and her daughter Jessie, who live near Pittsburgh, Pa. The women put the chapters together along with another daughter, Regina Fisher, who lives in Patchogue.

They’d check in with O’Neill after making their selection on things like, ‘what’s an OIC?’ (It’s Officer in Charge.)

“I made it a point that there was no misery,” he said. “I looked for the funny and the different.” And some drama.

He did begin the book with the basics. His roots go back to a rural area 60 miles north of New York City, where he attended a one-room, one-teacher school. His dad owned a hotel, part of which was turned into a general store with a post office; living quarters were upstairs. While he was working as a telephone installer in Manhattan, the war broke out. He enlisted in the U.S. Army Signal Corps.

Then the stories came.

O’Neill is 93. He is articulate and the related experiences are succinct and interesting. In essence, a good read about an important piece of history.

The front cover is a picture taken in 1945 when he crossed into the Rhineland. That’s him on a captured German motorcycle with a British Webby in one hand and a two-shot derringer in the other.

Malia, the family historian, said it took about a year to assemble. “There was a lot of back and forth on how many stories would be included and after getting it in shape there was the issue of how to publish it,” she said, adding that she asked her daughter to review the chapters.  “My sister Regina would read things to him,” Malia said. “Regina was always over at the house with dad and I would go back and forth with the publisher.”

O’Neill, she said, was fully engaged in it’s metamorphosis.

A lot of the articles Malia culled through were typed on manual typewriters with print that was fading. While her dad’s life is fascinating — he was in the reserves after the war — she stuck with his World War II experiences. Her two older daughters Lana and Rhiannon also helped with various aspects.

Malia suggested Amazon Create Space and the book came out this past summer.

O’Neill is someone to emulate. He and his wife, Veronica, who passed away six years ago, had 10 children, and he got his master’s degree, then doctorate at New York University in economics and history at night. He was a department head at Suffolk County Community College and division chair. “I always assigned myself a class or two,” he said. The family moved to Patchogue from Flushing, Queens in 1968. There’s a 1992 Faculty Association plaque for dedicated service from SCCC, as well as three Man of the Year awards from the VFW Jayne Lattin Post 2913 in the dining room, a very small representation of the medals, honors and proclamations he received throughout his life.

The book wasn’t his first storytelling foray. Because the family is far-flung, for eight years he sent a one-hour tape to his grandchildren, eight different groups, of fairy tales that mentioned some by name and included history and geography. “The girls liked stories about cats and horses,” he said. “Then I went back in time and included the solar system.” He made up the stories on his walks, several milers, then did research.

Malia, whose husband was in the Navy, said the family moved a lot in the early years. Her children and their cousins went to sleep listening to the tapes. “His voice was the last thing they heard before drifting off,” she said.

O’Neill said the war gave him experiences that helped him in life and also enabled him to see other countries he would never have seen.

His book is available on Amazon.com, but you can catch him when the Greater Patchogue Historical Society hosts him as their guest author on Nov. 19 at 7 p.m. at the Patchogue-Medford Library on Main Street.