Member of Post 2913 gathered together with recruiters from around Suffolk County, and members of the American Legion and Community to say a sad farewell to SGT Jonathan Collins, who was killed in a car crash on his way home from Alive After Five doing a recruiting event. SGT Collins has touched so many people in the community, none more so than his fellow recruiters. Members of his unit will be escorting him home to his Mother in Florida for his service. 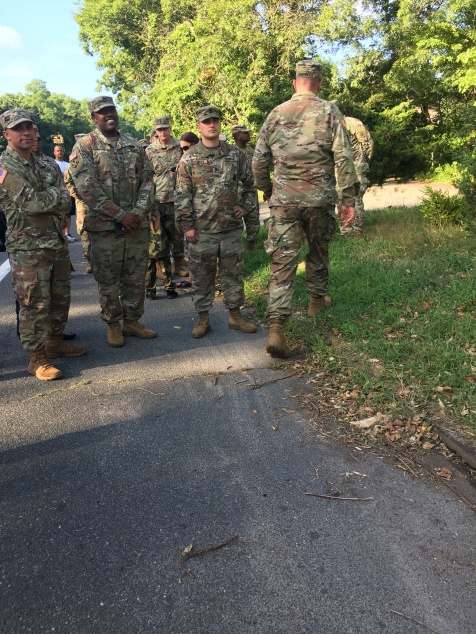 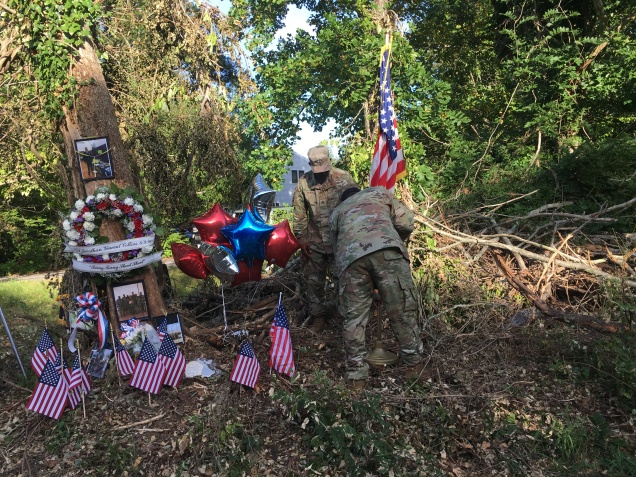 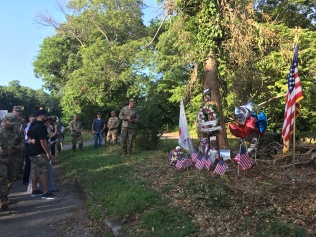 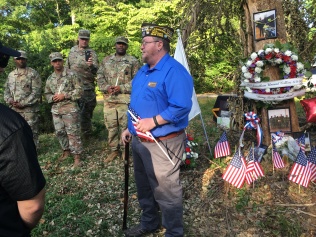 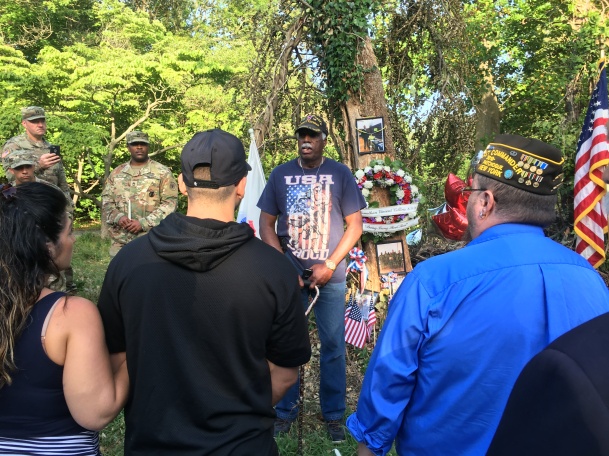 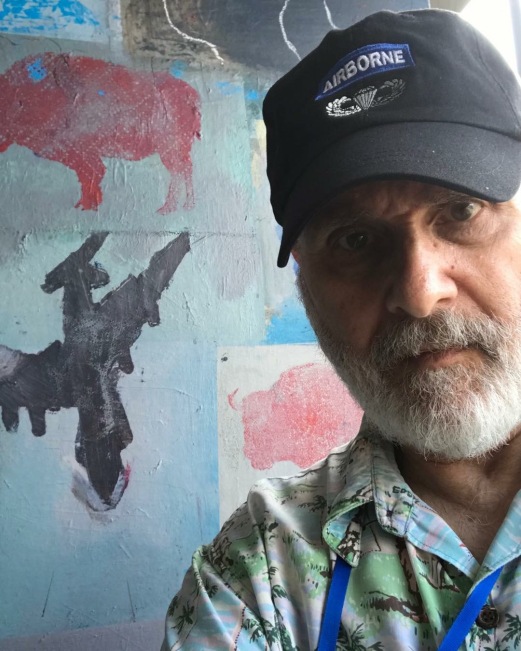 The push goes on in an attempt to build the Worlds Largest Pyramid of Scott’s TP during the July 19th Alive After Five. Thanks to the efforts of Meat Farms on 112, we were able to get customers who were shopping to donate another 1700 rolls of TP for the event. 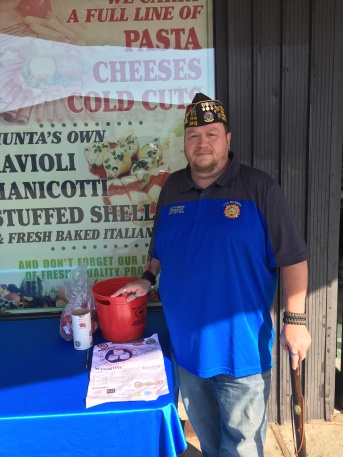 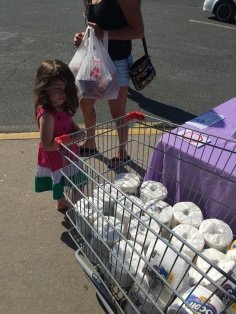 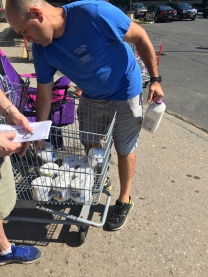 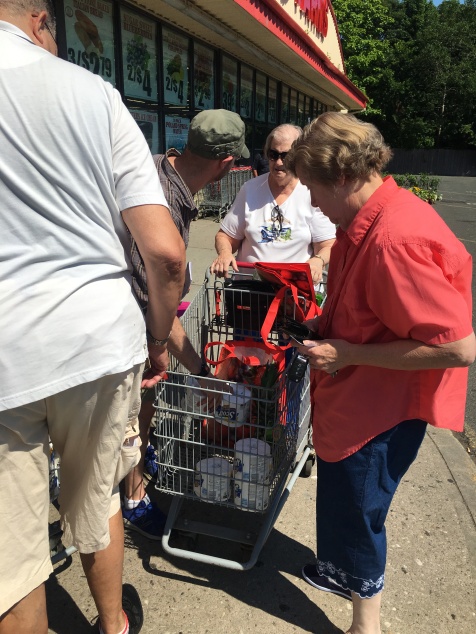 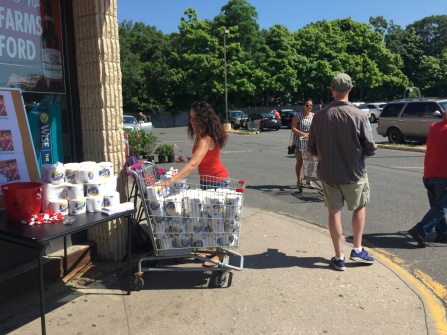 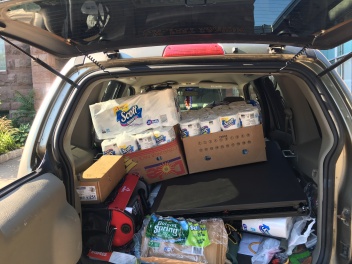 On June 2nd, VFW Post 2913 gathered with County Legislator Rob Calarco, members of the Swan Lake Civic Association, American Legion Post 269 and Vietnam Veterans, to re-dedicate the Vietnam Stone at Swan Lake, thanks to the hard work and dedication of member and Guard for the Post Peter Palamidis. Peter saw that the stone was hidden from view, and that the tree had died. He took action on contacted the Swan Lake Civic Association and Rob Calarco to get the problem resolved. Peter remembers being disrespected when he came back from Vietnam and was not going to let that happen here. He knew that this was important to do for all veterans that went off to war, but most especially for those that served in Vietnam.

Peter’s family joined us that day as well to not only see the great work that he did, but to be there as he received a Proclamation from Suffolk County Legislator Rob Calarco for the impact he made on the community.

VFW Post 2913 was pleased to be included as a backdrop for part of an upcoming film “Polybius” which is being filmed for entrance in the Sundance Film Festival. 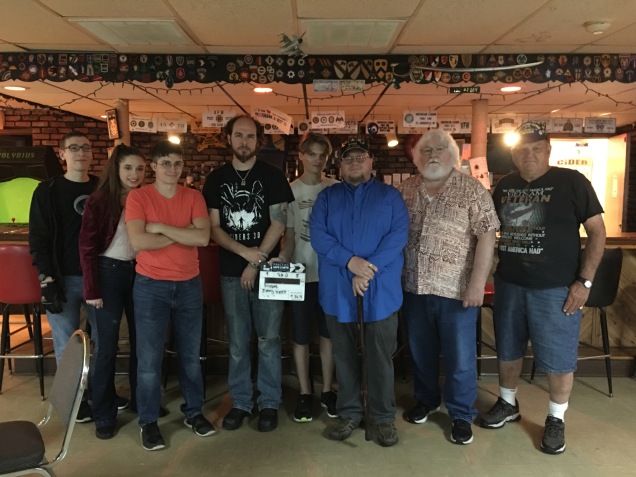 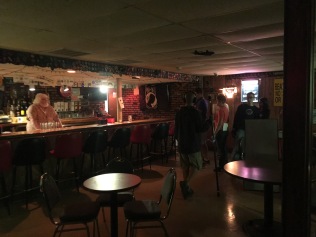 Memorial Day is one of those days that the VFW does a lot in a short time, because we have so many to honor in just one day. Members of the Post and the Auxiliary gather together on this day to pay our respects to those that gave so much.

VFW Post 2913 started it’s day off by going to the water to honor those lost at sea to not return. We started this honor due to the fact that one of the people our Post is named after BLEECKER LATTIN, was on a ship in Pearl Harbor that sank during the attacks, and his remains never recovered. 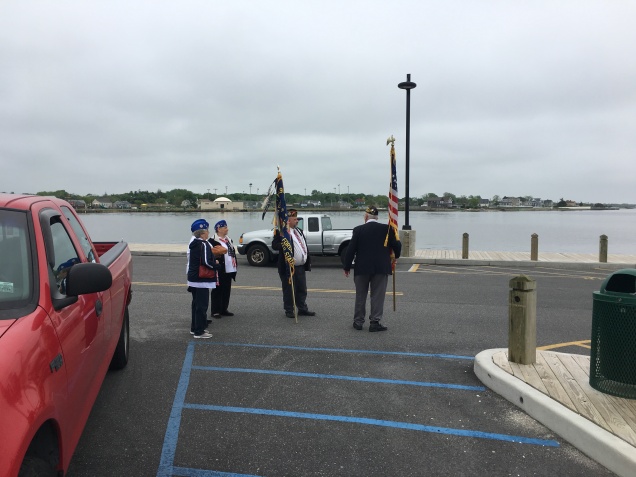 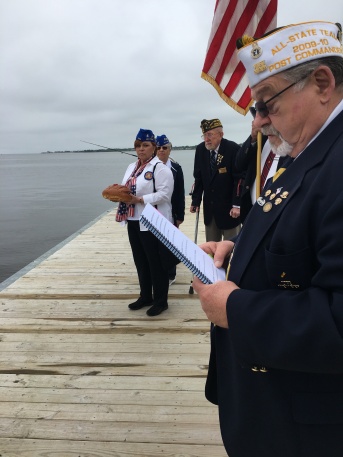 We than go to one of the 5 cemeteries around the village and pay a lasting respect to a fallen Soldier. This year we went to St. Francis Cemetery and paid our respects to JOHN KELLY, a World War I veteran. 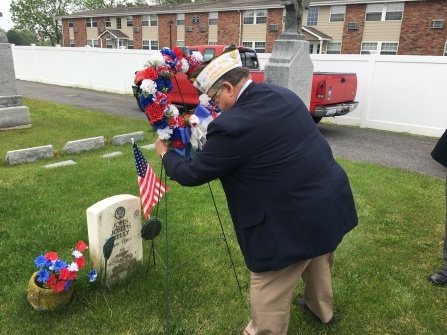 We than return to our post to pay our respects to all those members that have been lost this year. Members like ED SACCO.

Finally we line up for the Parade followed by a service at the Veterans Park in front of the American Legion Post 269. The Parade is organized by the United Veterans of Patchogue consisting of the Veterans of Foreign Wars Jayne-Lattin Post 2913, American Legion Patchogue Post 269 and American Veterans Post 111. This year the organizing organization was VFW Post 2913, led by Outgoing Commander GEORGE BARRETT, MC for the parade and event was Incoming Commander DAVE ROGERS.

After the parade the ceremonies continue at the Veterans Park, where JOHN GALLAER from EMANUEL LUTHERAN CHURCH OF PATCHOGUE gave the opening prayer. Followed by SOUTH OCEAN MIDDLE SCHOOL doing America the Beautiful. Incoming Commander DAVE ROGERS than gave the opening remarks about what MEMORIAL DAY’s start, where it was, and where it is now in the situation with the current wars, and those bringing the war home with them. Than the Commanders of the VFW (GEORGE BARRETT) American Legion (JON RALPH) and AMVETS (JOHN PIORKOWSKI) spoke about their views of Memorial Day. The Key note speaker was Mayor PAUL V. PONTIERI, JR. who spoke about not only what Memorial Day means to him, but also to the rededication of the memorial statues and cannons for those that gave all for their country. The Mayor also welcomed honored guest to the event including Village Trustees JOESPH KEYS, SUSAN BRINKMAN, and LORI DEVLIN. Suffolk County Legislator ROB CALARCO said a few word about the importance of Memorial Day to him and the Village.

This was followed by the Firing Detail and Taps from AMVets Post 111, and GEORGE EGAN of VFW Post 2913 raising the Flag.

After the usual ceremony this year we also re-dedicated the WWI Cannons, done by the American Legion Post 269 and Mayor PAUL V. PONTIERI, JR.. Followed by the Dedication of the 9-11 Tree which was done by Incoming Commander and 9-11 First Responder DAVE ROGERS. Included in the dedication of the 9-11 Pear Tree was the MALER FAMILY who lost ALFRED RUSSELL MALER during the attacks.

We than presented trophies to SOUTH OCEAN MIDDLE SCHOOL and SAXTON MIDDLE SCHOOL for their renditions of Patriotic Selections during the Parade and at the Ceremony,

The ceremony was closed with a Patriotic Selection from SAXTON MIDDLE SCHOOL, and the closing prayer from JOHN GALLAER from EMANUEL LUTHERAN CHURCH OF PATCHOGUE. 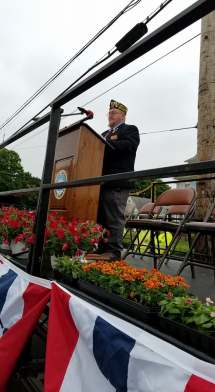 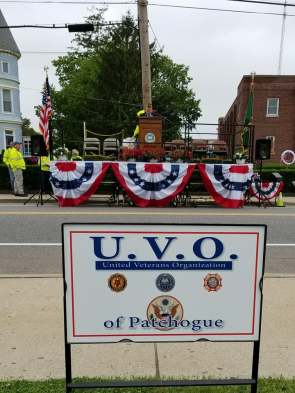 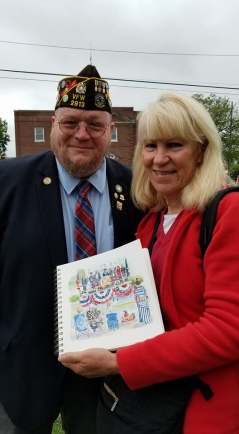 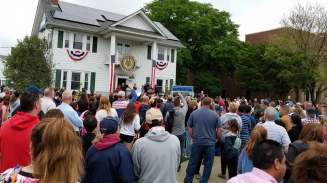 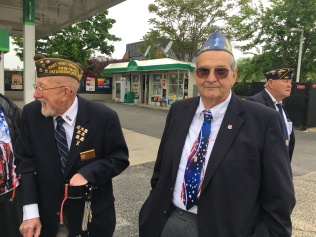 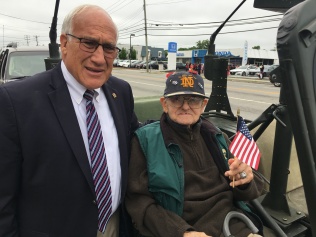 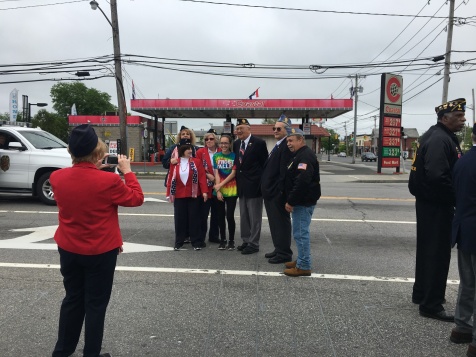 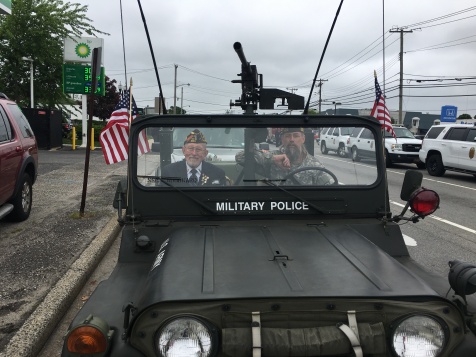 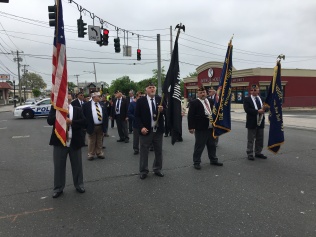 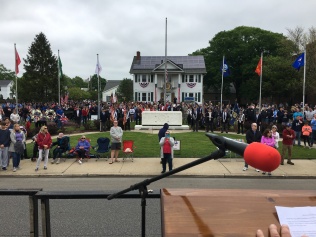 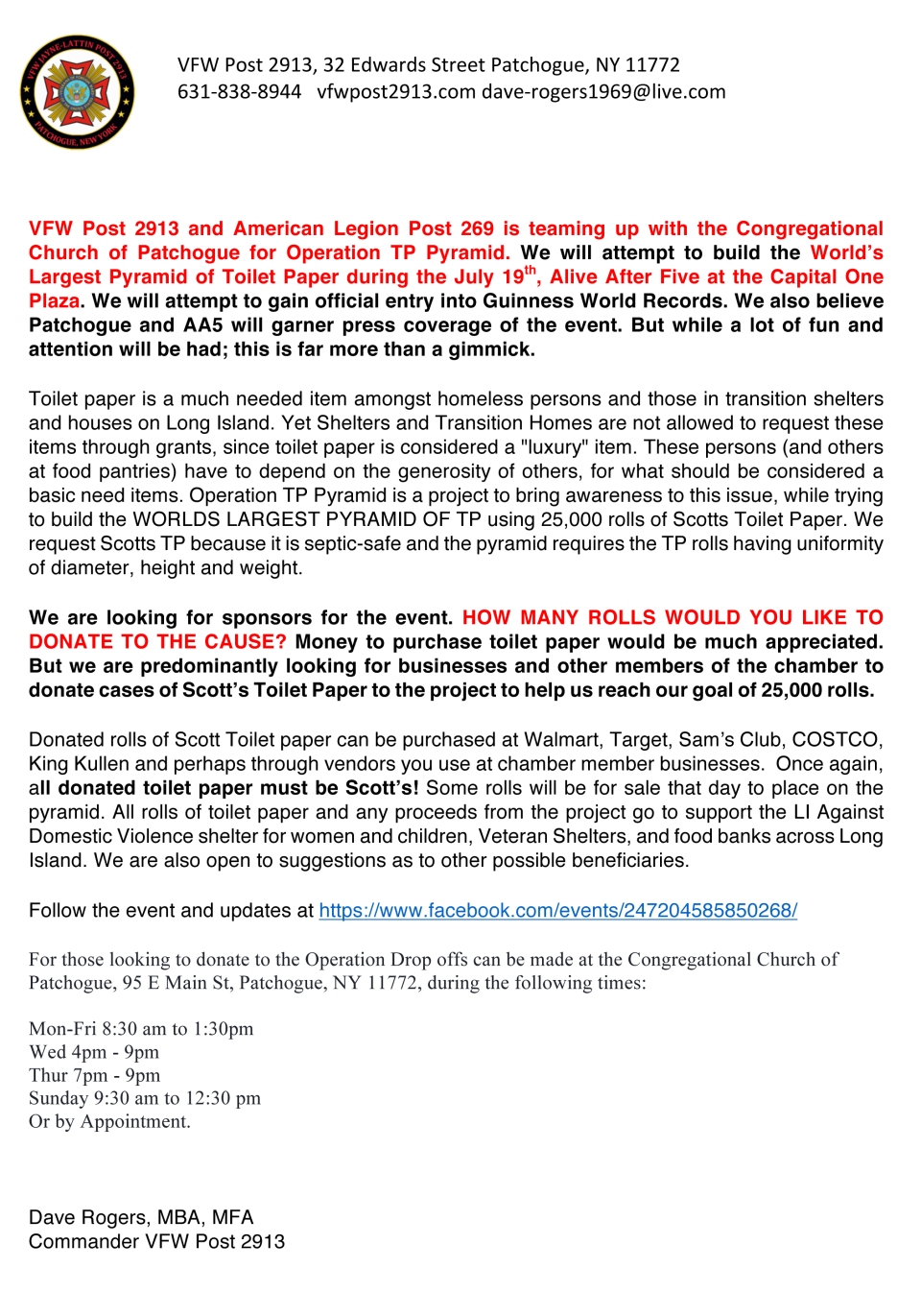 Though generations apart, veterans of the Vietnam War and current wars share many things in common when it comes to life after service, like communities that don’t honor them as much as they should, a failing healthcare system, and a struggle to make ends meet.

Don’t get me wrong, some things have gotten better over time. Soldiers, Sailors and Airmen of today are definitely treated better than those who came home from the Vietnam War, but the divide is not that great in other areas.

After service, the job market is not as abundant for those who served. Many, thinking that their training in the military will help them find jobs, only come out to find advanced degrees take precedence over years of on-the-job training, working and learning. Others are finding that their civilian markets are over-saturated with workers and veterans need to go back to school to find another career path. Then there are those like Infantry Soldiers who find there is little to no job path when they enter the civilian world. Sadly, out of the almost two million Post 9/11 veterans eligible to use the GI Bill, only about one third have actually taken advantage of it.

The worst issue is probably healthcare; currently the VA only enrolls about 32% of veterans who leave the military, leaving hundreds of thousands of veterans in need of better medical treatment. What most veterans don’t know is that enrollment in the VA is more than just healthcare; enrollment also includes education, housing and other benefits that veterans need for themselves and their families.

Current soldiers are not the only ones with these problems; 30% of Vietnam Veterans have not received any care from the VA, many of whom are women and support staff. About 32% of veterans who live in Suffolk County are homeless, in transitional housing, or in shelters. About 20% of them are Vietnam Era Veterans. The leading cause of homelessness for veterans is alcohol and drug related issues that stem from Post Traumatic Stress Disorder.

We hear the numbers all the time. 22 veterans take their lives every day, but what that number does not tell you is that 14 of them do not have access to the VA or any kind of medical care.  Veterans are not given the information they need to get the proper help. Using New York as an example, every major area of New York has service officers. Some work for the state, some for the county, others for the Veterans of Foreign Wars (VFW) and the American Legion (AL). Each of these service officers are there to help veterans find and receive the benefits they need, free of charge.

Besides service officers, the VFW and the AL are great resources for veterans to use. Veterans must get involved in their communities and help structure legislation for the future. The VFW and the AL are two of the oldest veteran organizations in the U.S., and they are the only two organizations that have legislative groups in each state that go to their state capital and to Washington DC to fight for veterans’ rights and benefits. Veterans must have a hand in reclaiming their civilian lives after separating from service, but first they need clear access to the benefits due them. Basic human necessities are denied so many veterans who served their country. Vietnam Veterans deserved better than they got and today’s service men and women deserve better too. 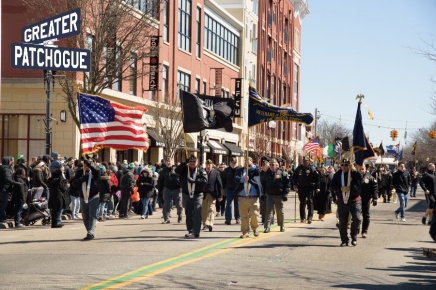 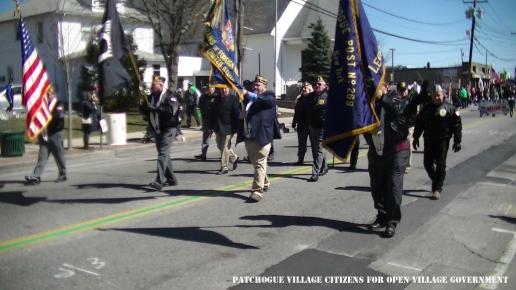