VFW Post 2913 and the Post 2913 Auxiliary held their 73rd Annual Installation of Officers and Awards Banquet. This is a unique time of year where we not only get to install the officers but thank special members of the community for their support to the VFW, Veterans of Patchogue and the Patchogue Community.

This event was well attended with about 90 people in attendance including members of VFW Post 2913, the Post 2913 Auxiliary, friends and community members of Patchogue and the Commanders, Honorees and Distinguished Guest which included:

Past State VFW Commander Dennis Sullivan and his wife Theresa of Post 4927 AUX.

The evening started off with light Horderves and Music by Jason Kaplan. at 7:30 Out-Going Commander George Barrett Opened the Post with the Sea Cadets performing the Color Guard. Chaplain Mike Amodio gave the opening prayer and presented the POW/MIA Table. The Post meeting was than suspended for the Awards Ceremony and Dinner.

Due to the amount of work that has been done in the community, from members of the community and around the post this year a lot of awards where presented at the Dinner. All Honorees received an award from VFW Post 2913, as well as from Congressman Lee Zeldin, State Senator Tom Croci, County Legislator Robert Calarco, and Village of Patchogue Mayor Paul Pontieri.

Officer of the Year, PO Alberto Acebedo was recognized for being part of arresting 3 out of 5 pattern crimes this last year. Patchogue Ambulance Company recognized Christopher Boccabella for his continued hard work in the community answering over 1000 calls. Ex-Capt Joseph Fising was not able to be present to receive his award for many years of service to the Patchogue Community. This year we included the Media Award for the Long Island Advance who has shown a lot of support to the VFW and the Veterans of Patchogue insuring that we have coverage for our events and programs we do in the community.

Three special awards where presented that night. First to Nicole Niemiec a member of the Patchogue Medford High School Red and Black Newspaper for her coverage of the Veterans of VFW Post 2913, unfortunately Nicole was not able to be present. The Village of Patchogue DPW was awarded for their continued support to veterans and their programs in the village, DPW was also not able to attend. David Kennedy accepted the award on behalf of the Patchogue Chamber of Commerce. Thanks to their efforts and support VFW Post 2913 was able to make new connections in the Village, expand some of their programs, get new sponsors and share information with the members of the chamber.

Member Awards were given to Peter Palamidis and Scott McKendrick. Peter Palamidis was walking in Swan Lake and noticed that the Vietnam Memorial Stone was not being taken care of and that they tree had died. Instead of just complaining Pete jumped into action and reached out to people to help fix the problem. Thanks to his hard work there is a new tree planted, the stone is now visible from the street. A dedication ceremony will be held on June 2nd at 10 AM at Swan Lake.

Scott McKendrick a member of the Post and also of the Sons of the Union worked very hard this last year with members of the Sons, the Village of Patchogue, the Patchogue Chamber and others in the community to see that the Civil War Statue in the Veterans Park get repaired. Thanks to his hard work, the statue is well on its way to being repaired and the supports redone. The statue is expected to be back in place for Veterans Day in Nov.

Besides the members of the Post who help out around the hall. Members of the Community and Friends of Out-Going Commander and Hall Rental Chairman George Barrett made a lot of projects possible this year. Some helped with repairs around the post, some with cooking for fundraisers and a few doing both. In order to show our appreciation VFW Post 2913 presented them with special awards for their support. The Honorees included, Ken Stoeckert, Tony Riggio, Joe Dragone, Bob Otto, Jim McGunnigle, Frank Wragge.

Besides for the work that we do the VFW also recognizes members who have been in service to the VFW for more than 5 years. This year the Post presented a 20 Year Pin to Chaplain and Past Commander Michael Amodio, and a 65 Year Pin and Patch to Past Commander Winn Davis for their continued support and membership to the VFW.

The LT Michael Murphy Sea Cadets was presented with a certificate for their participation and support during our Installation Dinner by providing the Color Guard.

Than the Auxiliary presented their membership awards including presentations to Auxiliary members McKendrick and Rogers for their support and service.

The Post then presented it’s Man of the Year Award to In-Coming Commander Dave Rogers, who was instrumental in getting a lot of donations, grants and collections for the Post, the Homeless Program, Buddy Poppies and the Installation Dinner. Rogers also received a quilt from the Post 2913 Auxiliary for his support to the veterans of Patchogue.

After the Awards dinner was served which included Chicken Cordon Bleu (cooked by Jim McGunnigle), Corn, Broccoli rabe (Cooked by George Barrett), Pasta Primavera (Village Idiot), Rolls and Salad, with the assistance of members of the Post George Barrett and, Dave Rogers and Bob Rogers of the Auxiliary. The set up for the evening was made possible by the work of members of VFW Post 2913 George Barrett, Dave Rogers, George Egan, Jeff Molitor, Members of the Auxiliary Nancy Barrett, Maria Shine, and Bob Rogers and friends of the Post Tom Rogers, and Jim McGunnigle.

VFW Post 2913 than conducted their installation by George Egan. Outgoing commander George Barrett escorted the members to the Alter where they took their pledge of office, followed by a prayer from Chaplain Michael Amodio. Commander Rogers was presented with his gavel of Office and his Commander Hat, Rogers than spoke about his years of service in the military and how he plans to use what he learned through that to help the VFW. He also spoke about how the VFW was instrumental in getting his life back on track and his commitment to continue to give back to the VFW.

Guest than enjoyed deserts and coffee provided by Hummel Hummel Bakery, Roast Coffee and Tea Trading Company and a special Commanders Cake made by Brittnie Perry of Roast. 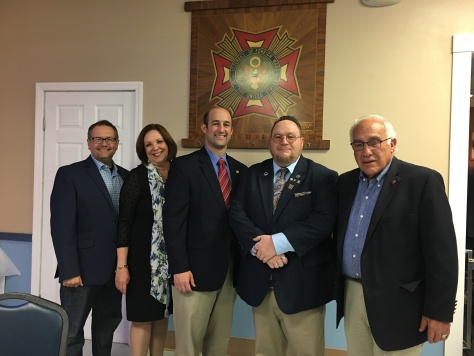 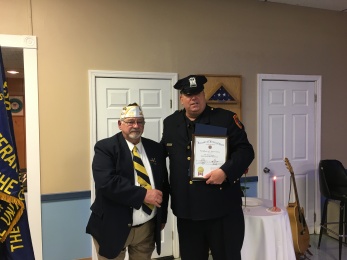 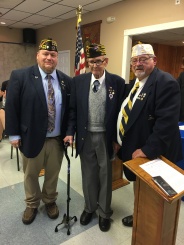 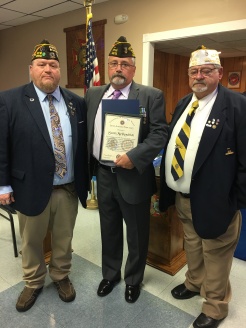 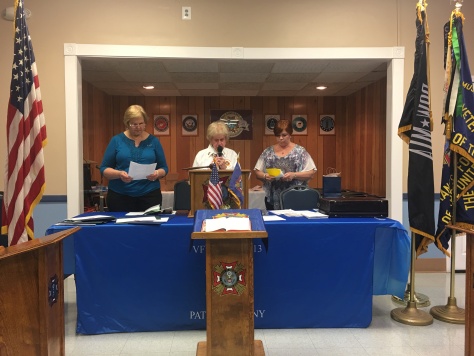 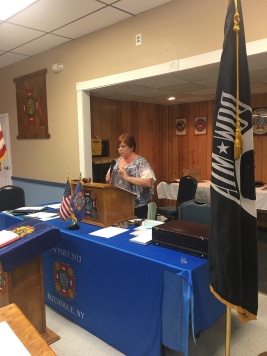 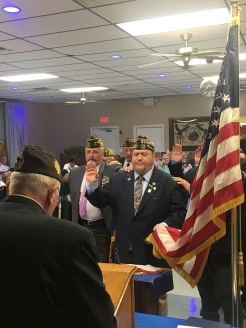 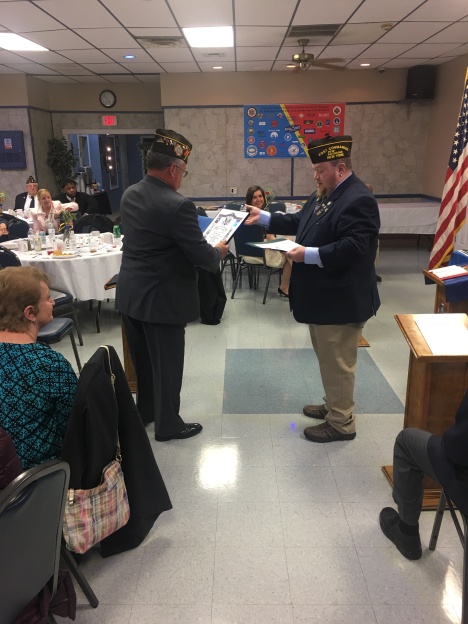 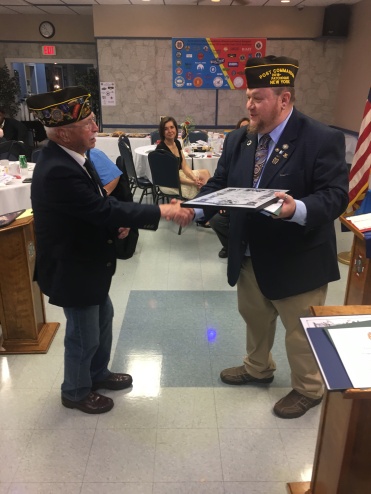 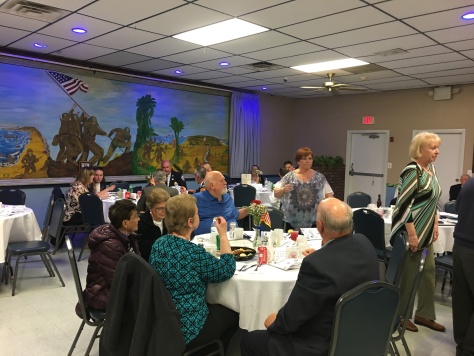 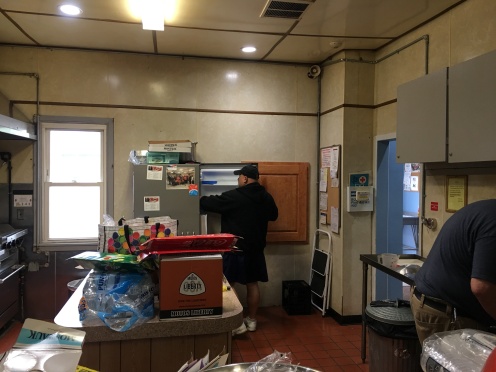 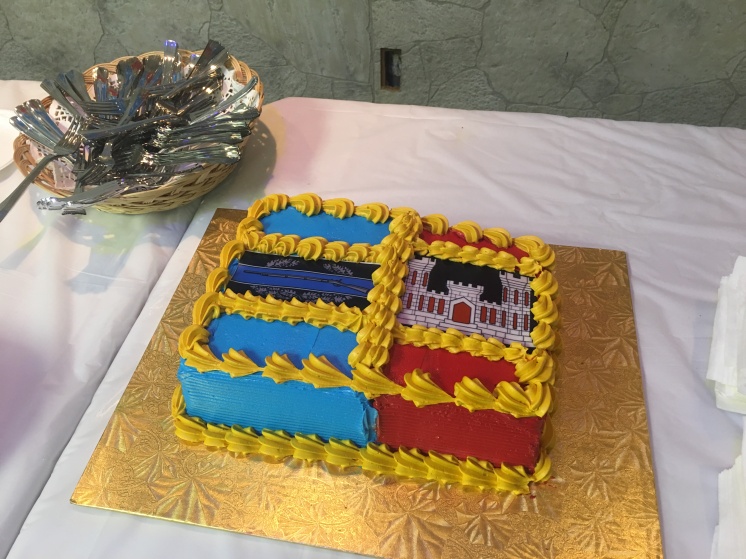