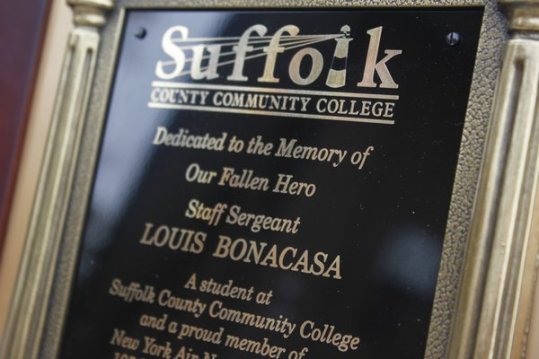 The brisk weather did not stop roughly 150 people, including several dozen veterans—some of whom are currently enrolled at one of Suffolk County Community College’s three campuses—from attending Wednesday morning’s Veterans Plaza dedication on the Northampton campus.

The new plaza, which sits to the rear of the campus’s Peconic Building, boasts several garden beds staked with dozens of American flags that run down the center of a long rectangular cement patio.

On Wednesday, college officials dedicated a plaque that reads, “Veterans Plaza. You Served, We Honor.” It’s designed to honor the nearly 700 veterans who now attend classes at one of the college’s three campuses, including those in Selden and Brentwood.

Shaun McKay, the president of Suffolk County Community College, said officials decided to create a Veterans Plaza on the Northampton campus because it is a “small but important way to say we remember” those who served.

“The sacrifices can never be repaid, but we can ensure that we never forget,” Mr. McKay said at Wednesday’s dedication ceremony.

The Northampton campus is the second campus to dedicate a Veterans Plaza. College officials created one on their Selden campus, also known as the Ammerman campus, last year, and plan to dedicate another on the Michael J. Grant Campus in Brentwood in 2018.

In addition to dedicating the new plaza, officials recognized those serving in the military, as well as those who have made the ultimate sacrifice. That list included Air National Guard Sergeant Louis Bonacasa of Coram who was only 31 when he was killed on December 21, 2015, by a suicide bomber near the Bagram Airfield in Afghanistan.

His widow, Deborah Bonacasa, a veteran herself, was invited to address attendees at the ceremony, held also to honor the sacrifice of her husband, who had been studying visual arts at the Northampton campus when he was killed, and others like him who have laid down their lives on the battlefield.

Ms. Bonacasa, who has a 7-year-old daughter, Lilliana, told attendees that losing her husband, who had been stationed at the Air National Guard base at Francis S. Gabreski Airport in Westhampton, taught her to take nothing for granted.

“The grief is so emotional and agonizing, but I take comfort in that he died doing what he loved the most,” she said, fighting back tears. “Perhaps grief has a positive impact on us so that this time it can count.”

David Rogers, a veteran of the first Gulf War and the Bosnian War, said he attended the ceremony because some veterans—especially those who have seen combat—have a difficult time reacclimating to civilian life upon their return. Mr. Rogers, vice commander of Veterans of Foreign Wars Post 2913 in Patchogue, added that having places like the Veterans Plaza on the Northampton campus can help some veterans reconnect with their communities.

“As someone who has served, you feel so lost,” said ANG veteran Marcelle Leis of Patchogue, program director for the Joseph P. Dwyer Veterans Peer Support Project, a program that offers assistance to veterans suffering from Post-Traumatic Stress Disorder, or PTSD, and traumatic brain injuries, who also attended the dedication. “But then you turn around and see the support. It really makes you feel like you’re not alone.”

At the end of the ceremony, Shannon O’Neill, the college’s director of veteran affairs, honored each veteran in attendance by presenting them each with a coin that reads: “You served, We honor.”

At the conclusion of the dedication ceremony, family members and friends of many veterans greeted each other, some sharing their memories of the late Mr. Bonacasa.

“We didn’t just lose a soldier. We lost a father, a husband, a brother, and one of our own,” said Meredith Starr, a visual arts professor at the Northampton campus who noted that Mr. Bonacasa was one of the most talented students she has ever taught.

“He really has left his mark here, that’s for sure,” Ms. O’Neill added.