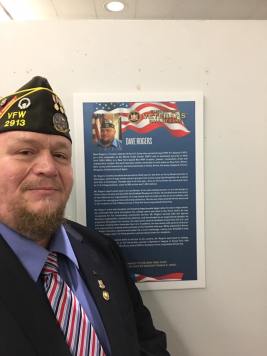 Dave Rogers, a 14-year veteran of the U.S. Army who served in Iraq (1990-91), Bosnia (1997), as a first responder at the World Trade Center (2001) and in homeland security in New York (2002-2004), is a New York-based Neo-POP sculptor, painter, installation artist and independent curator. His work has been shown nationally in such areas as New York, Miami, New Jersey and Connecticut, and internationally in China, Korea, Germany, England, France, Mongolia, Switzerland and Spain.

Mr. Rogers spent seven years as a professor of art and visiting lecturer in art and design in China, where he also worked with the Disabled Peoples Art Union. He worked as an instructor at two different art organizations on Long Island and currently serves as an art advisor and lecturer for emerging artists and young collectors. He has won many awards for his work and is the recipient of the O’Malley Grant in Fine Art from Long Island University.

Mr. Rogers’ work with disabled and disadvantaged people began when he was in high school. He continued this work throughout his college years and time in the Army where he was recognized for his outstanding community service. Mr. Rogers worked with the Special Olympics organization, helped train athletes, and was booked as an inspirational speaker by programs throughout the country. He represents several disabled artists from the U.S. and overseas, helping them showcase their art. In addition, he also works with several veterans’ arts organizations, helping them promote art for disabled veterans. While stationed in Korea, Mr. Rogers became a sponsorship leader for a local orphanage, raising over $10,000 to help the orphanage repair its living quarters and purchase books for residents.

After becoming disabled while in service to his country, Mr. Rogers went back to college, attended the Academy of Art University, earned a Bachelor’s degree in Visual Arts with Honors from SUNY Old Westbury, and an MFA in Sculpture from Long Island University.